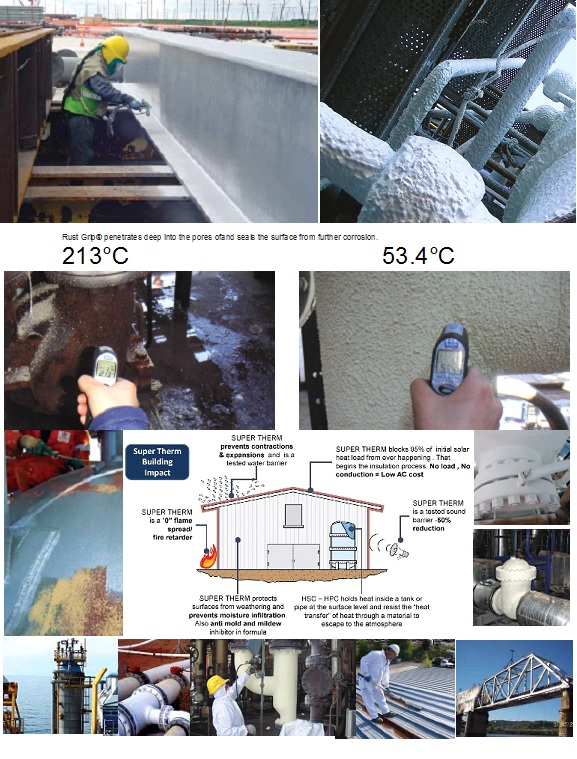 Mymac Co. is an authorized dealer of the following Superior Coating Products namely;

Super Therm®: does not absorb solar heat and does not require thickness effectively eliminating a measurement of (R) value, which is the measurement of how fast heat loads or is absorbed and then the speed at which it transfers through the material is called the “R” value.

Super Therm® has four (4) ceramic compounds. Three of these compounds match the wave size of each of the solar radiation waves to block the heat load. The fourth ceramic has such low density that the heat cannot load into the surface of Super Therm® and therefore cannot be absorbed and transferred. This is why the surface of Super Therm® is not likely to be more than 2-10 degrees F over ambient air temperature in any climate. If heat load is blocked, there is no heat to be absorbed and transferred even when the surface becomes dirty. Super therm® can be applied on all external surfaces (Buildings, metal, masonry, wood, tar, concrete, aged foam, fiber glass, Vehicles, Tents, pipes, Tanks etc.). Field documentation shows no change in the performance of Super Therm® after 10 years, and only an 8% drop in blocking heat load after 15 years hence the product has 20 years performance warranty. ()

Super Base/HS: is a one-part water-based acrylic coating that is easily applied without environmental concerns, and used as a base coat for either SUPER THERM or SUNSHIELD. SUPER BASE/ HS can be used as a base coat to seal tar, asphalt, shingles, rubber, concrete or wood roofs.

Rust Grip ®: One-Coat Encapsulation. Corrosion control is a given challenge for many industries with systems exposed to extreme weather and moisture. With Rust Grip® , you can stop the progression of rust and corrosion like never before. Within one hour of application, Rust Grip® begins to cure by pulling moisture from the air and microscopically swelling into the individual pores of the surface as it hardens.

This process seals against any possibility of outside air, moisture, or minerals attacking the surface and causing further corrosion. Rust Grip® also encapsulates toxic elements such as lead based paint, asbestos and other bio-hazardous materials. The success of Rust Grip® in a variety of environments can be seen everywhere from chemical fields, oil fields, oil rigs and numerous hazardous areas. This widespread use is just one more way that SPI remains an obvious and trusted choice to solve real world problems and conditions. ()

HPC® Coating: The solution for preventing Corrosion under Insulation (CUI) Corrosion will always develop under insulation with a wrap and cladding, blanket, or metal jacketing system. Chlorides (salts) are present within the raw material makeup of the wrap itself, and these salts promote corrosion. Metal jacketing was “never” air tight or moisture resistant. As a result air, humidity and moisture absorb into and penetrate through the wrap destroying its insulation performance and causing Corrosion on the metal surface under the wrap – a condition that is consistently seen in the field. HPC® Coating is sprayed directly on the surface of the pipe, tank, valve or elbow (virtually any configuration) to completely seal and insulate 100% of the surface without leaving air gaps between the insulation and the surface that allows air and moisture penetration and causes corrosion. HPC® Coating is a water-based, non-toxic coating that insulates up to 900°F (482°C) internal temp and is applied while the pipe or tank is operating without a shutdown. HPC® Coating and the approved top coats seals the surface from air and moisture and eliminates corrosion development (CUI). ()